Stolen - The Lost Girls of Nigeria - The Worlds Shame 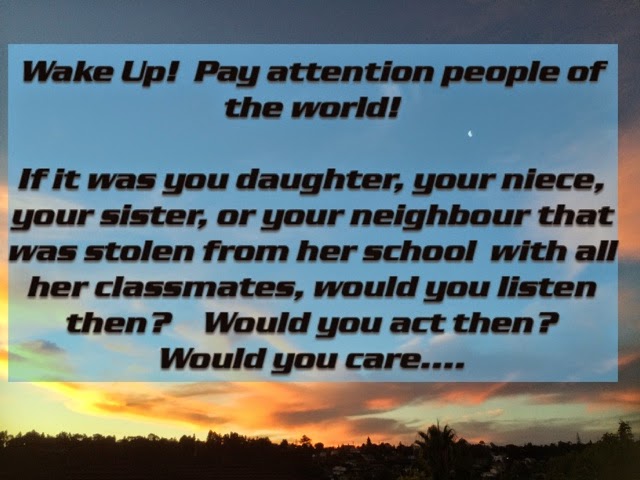 I have been stewing for a few weeks.  Not the kind of stewing that involves cooking, but the kind of mental stewing whereby ones growing indignation and frustration with a situation grows and festers like a suppurating wound.  It has left me wondering - let me explain.

Something horrific happened in the world several weeks ago, and for the most part, the appalling atrocity that was committed has flown under the radar whilst the media has focussed on more important issues.  Issues like which Pope will be made a Saint, Easter, Royal tours Down Under, an NBA scandal, political resignations and of course the celebrity bachelor engagement.

What could possibly be more news worthy than these things you ask?

Around April the 14th, 234 (although reports vary as to the exact number) young girls from between the ages of 16 and 18 were stolen from their school, as they settled down to sit their physics exams.   Insurgents from Nigeria's Boko Haram Militant group, reportedly dressed up in Nigerian Military uniforms, stormed the school, herding the girls into trucks under the guise of 'taking them to safety'.  Once they were in the truck, they burnt the school to the ground.  Unofficial reports have suggested some 40 of the girls escaped, either by jumping from the moving trucks or by running away from the village they were taken to.  Latest understandings around what has happened to these girls in the weeks since they were stolen include suggesting that some of these girls have been forced into marrying their abductors and sold for as little as $12.

Boko Haram, roughly and usually translated as 'western education is forbidden', has been responsible for numerous brutal attacks on the people of Nigeria, including a horrific attack in late Febuary where they murdered 59 male pupils at a boarding school in the north east of Nigeria by either shooting them or burning them to death.  Yet another atrocity that the worlds media has left largely unreported on.

The attacks on these children - Boko Haram tend to seek out children as its main victims - are horrific.  Their parents must be beside themselves with grief, and the way the world has forgotten them leaves me reeling in shame, and wondering.

It raises some really disturbing wonderings for me.

1. I wonder, why did/does the media largely leave this atrocity to go unreported?


There were some reports - and in the last few weeks there has been a brief mention of it here in NZ on the news.  I first saw it on a news feed on my Facebook wall where someone had made a link to a report out of the UK.  As it relates to education, it had popped up under something I subscribe to.  At the time, I wondered at its validity, surely if it was as significant as that, the worlds media would be shouting it from the rooftops.  The public outcry would be loud and significant and all would be done to find these girls.  Not that dissimilar to the worlds concern over the Ferry sinking with all those school children on it, and the missing Malaysian plane.

But no - the issue remained largely unnoticed.  As the social media networks like Twitter ramp up public debate on this atrocity, more seems to be coming out about what happened, but that is not so much by the big news media corps but by bloggers and those who are are motivated by human rights.

2. Why did the Nigerian Government not act faster, and why would the Military mislead?


Reports out of Nigeria in the first few days of this atrocity are conflicting.  Initially it is reported that the military claimed they had rescued the girls and only a little over 100 were involved.  This was retracted some days later.  I am left wondering why the Military did not follow after these young woman and rescue them?  Are they not important?  Do they not rate as worthy of rescue?  Is the military not very good?  Are they now embarrassed that they did not rescue them as they initially claimed and were 'outed' by the parents and schools principal?  Is the Government embarrassed and now hiding their head in the sand like an ostrich?

Whilst the population is seeped in poverty, the Government, with its oil rich resources, must have some resources at its disposal to rescue these girls - assuming the girls are 'important' enough for them to rescue.

3. I wonder about what it says about humanity...


If the world, and the power of our media outlets, fail to highlight these kinds of atrocities in such a way that both the Nigerian Government is forced to be held accountable, and the peoples of the world are united to stand up and say this is not ok - then what does that say about humanity?  Does it suggest that if it is not on our western shores, in our western schools, or our western daughters, sisters, or western girls - then it is of no value or importance?  Is this one of our worlds shames?

4. I wonder, if the world had been mobilised via the media reporting in the first days, if the girls would have been rescued and safe with their families right now.


This is perhaps, my most concerning and hopeless of all the wonderings.  Imagine if the worlds media had given this atrocity the attention it deserved, when it happened.  Imagine the outcome that would arise from a frenzied public outcry - the pressure this would have placed on the Nigerian Government to act.

It concerns me, and it breaks my heart, that these girls could have been saved, safe and given the message that they are important, and their lives are valued.  Instead, the message they have been given by their Government - a Government that should be about protecting its people from harm - is that young people are not worthy, that girls are commodities and unvalued, and that it is acceptable for them to be abducted, raped, sold and teated like slaves as if this was something out of the pages of the distant past.

5. I wonder if the Media understand their power and the responsibility that comes with that?


I understand that the big media giants of this world are ruled by the almighty dollar and it is about what sells papers.  But, I ask you, does the media not have a responsibility to ensure the world understands what is happening, and that they highlight the atrocities like this?

Perhaps I am being too harsh, for at the end of the day, it is the public that buys and reads what the media produces, and many seem only to be interested in what the young Royals are doing, and not at all concerned about wider global issues - especially when it is not in their backyard.

However, one only knows about what one is told - so that brings me back to the responsibility that the media of the world holds.  Considering the hold they have over what is reported and how it is reported, perhaps some of the worlds apathy rests in this direction.  Food for thought.

6.  I wonder, what would happen if over 200 girls were stolen from a western school near you?


Lets address the elephant in the room shall we?  Not an easy topic to broach, and one that leaves us all feeling a little uneasy.  I do wonder how quickly the world would have acted if this had happened at any of our schools - if it had been any of our children that had been abducted and sold into slavery.  Is it because it is from an African nation that the world looks away?

Does the fact that so many atrocities occur in nations like Nigeria (and many go unreported) that the western world becomes immune to yet another story that seems so far removed from our busy western lives?   Does this mean we place a higher value on the civil rights of our western children than we do of those who are not from our understanding of the world?  Serious questions that require serious navel gazing that more often than not leave us squirming uncomfortably.

7. I wonder if the western world is aware of how rife human trafficking is?


Human trafficking is one of our worlds greatest shames, and nearly every country in the world is involved in one way or shape.  To think that something as atrocious as over 200 girls being abducted in Nigeria is a non western problem, is shortsighted at best.  Human trafficking is rife and well established throughout the world.  1 in 5 victims are children and 2/3rds are women.

Whilst a majority of the victims come from areas in Africa, it does leave me to wonder - if the majority of the children and woman were western and were adducted from neighbourhoods like the ones we live in, would the world take more notice?   Or, is it because the world places less value on woman, children and girls, and even less value for those who are not from the western world?

8.  I wonder what will happen next?

I am aware that 'what ifs' and 'wonderings' are not always helpful but they are useful in terms of not being doomed to repeat the same mistakes, and if all they do is make us stop and reflect - then that is a positive move forward.


Finally, I am hopeful that there is a positive outcome for these beautiful young women who deserve to have the world behind them, and who deserve to be educated and safe in their own country.  It is what I would expect for my daughter, your daughter and all the daughters of the world.  It must be a human right to be safe, educated, housed, fed and free.  If it is what we would demand for our children then we all must demand it for all the worlds children - to not do so is a crime against humanity.

Excellent expose on this situation and Boko Haram.
http://www.smh.com.au/world/nigerian-schoolgirls-ignoring-their-fate-at-our-peril-20140430-zr1lz.html

More about the girls abducted and reportedly forced to marry.
http://www.wptv.com/news/world/abducted-girls-forced-to-marry-nigerian-extremists

Excellent opinion piece from CNN on why we need to act.
http://edition.cnn.com/2014/05/01/opinion/ghitis-nigeria-kidnapped-girls/

Report from the Tico Times
http://www.ticotimes.net/2014/04/30/boko-harams-horrendous-abduction-of-234-teenage-girls
Posted by Principally Mused at 12:32 AM