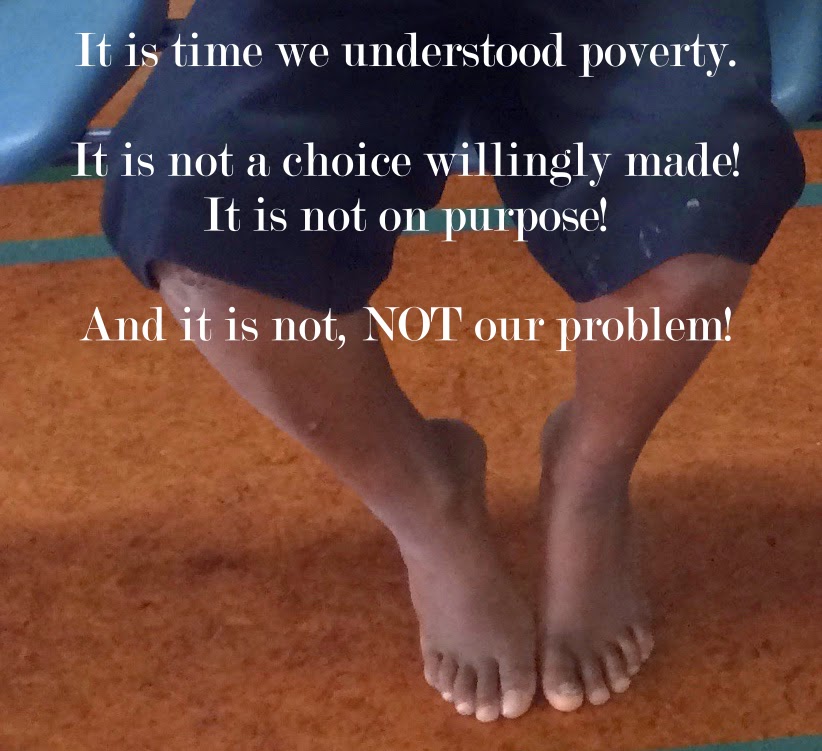 Yesterday I posted about how we need to address the social and emotional wellbeing of our students before we have a hope in Hades of getting any form of academic success, particularly for those students who are most vulnerable and at risk.  The quote that gave me my initial inspiration mentioned Maslow, as in Maslow's hierarchy of needs.   At the base of Maslow's 5 tier hierarchy are the two I want to address in todays post, most importantly the two at the base of the model.  The psychological (food, water, sleep, in essence our basic needs) and the safety needs (housing, security, resources, employment, health).

Both of these needs are critical, and both are at the heart of what is going on behind poverty.  For the purposes of this post, I am going to refer to poverty as we know it in the first world - countries like yours and mine.  I could spend the next 24 odd minutes typing about statistics, like one in four kiwi students in poverty, or nearly one thirds of the United Kingdoms students, or the 25% of children in the United States.  I could, but I won't.  Not today.  Instead I want to start people thinking about the key drivers behind poverty, and I want to challenge what people know.  For those of you in education, I want you to ask yourself, 'what does this mean to me, for my class and for our school?'.

It is a big topic, and it is not a quick 'one poster'.

Firstly, what is it?


There are a number of definitions but what they basically fall into is two main categories.  Stability and resources.

Generational is the one most commonly associated with poverty.  When someone uses terms like 'dole bludger' or 'handouts', and refers to people as 'lazy no good drunken bums who sit on their backside all day smoking and beating up their kids'. this is the type of poverty they are thinking about.

Situational poverty is quite different.  It is a time where someone is 'poor' due to unexpected circumstances.  Divorce, disease or other serious health issues, natural disasters (like earthquakes, flooding or hurricanes where people lose everything), war, death or unexpected job loss are all examples of situational poverty.  When these uncontrollable events happen, they can often be the catalyst that causes a spiral of events leading to loss of income, home and material possessions.  For some, the thing that stops them from getting out of their situation and getting assistance, is pride.

Both Generational and Situational poverty have a culture of their own, and a set of hidden rules and belief structures they operate from.  If all you take from today is it this - at ANY time, any one of us could find ourselves in the category of situational poverty.

For someone who is stuck in poverty it is important to understand;


- That many of them feel 'stuck' with no idea of a way out
- That life is very unstable - if one thing goes wrong it can have a domino effect (if the car breaks down and that is the only way to get to a job, then that is likely to lead to a loss of job, more debt and back to the start)
- Daily survival is hard work, it requires the person to focus on concrete problems like paying the rent, finding food and clothing the children.  Some families are dealing with up to 20 agencies a week, this is time consuming and emotionally exhausting.


The things that drive someone in poverty is quite different to what drives someone in the middle class or someone who is wealthy.  For those in poverty,  survival, the relationships they have with others and entertainment are important drivers.  A key driver for the middle class is achievement and work, and for the wealthy it is connections, money and political forces.  For each of the three groups, there are hidden rules that define how to navigate each 'world'.

When we understand the drivers behind resources like time, money, relationships, food and education, and the hidden rules that sit behind them, then we are able to start to work on a vision for assisting our communities to see a way forward.

A key to understanding poverty and a way out of it, is to understand resources, and the rules which which those in poverty, those in the middle class and those who are wealthy, operate.  Due to my 28 minutes whizzing past me faster than Superman, I will come back to this 'rules of poverty' and resources in future posts.

Suffice to say, if there are families in your community that are struggling with poverty, what, if anything above, has changed in your thinking?  What do you and your place do to assist your families to have access to key resources?  How do you help your students strive for new drivers and to build upon the resources they do have?

Posted by Principally Mused at 10:34 PM