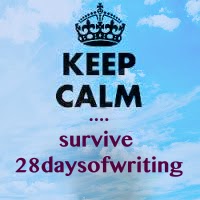 I confess on several occasions I thought it would be touch and go, especially on the night of my board meeting when I didn't get home until the middle of the night, and the last few posts have been like pulling teeth without tools or painkiller.  Not because I am unable to pull the proverbial rabbit out of a hat (which teachers and principals are pretty good at, I think), but because the tiredness I felt several days ago turned into a 'thing' which pretty much wrote me off yesterday,  leaving me laid out flat in bed.

So, what have I learnt?

In order to answer this, we need to go back to post two, which was about using the GROWTH coaching model to set the goal for this challenge.

The goal was "By the end of 28 days, I have completed 28 days of writing for 28 minutes at a time, so that I can improve my writing skills, find my inspiration and become ingrained in the habit of regular writing."

I feel I have completed the goal, and as a result of regularly writing I have indeed sharpened my skills. particularly around being less wishy washy regarding just getting on with it.  I am unsure if this is a habit yet, but I do feel like my passion for writing has been reignited.

I have found the following however:

Great question.  I don't know.  I would like to say that I will continue to post every day, and ideally, that would be marvellous but I suspect that the pressure I have placed on myself to post every day has not been helpful considering what I know is on my plate this particular term.  I may however sign up in April.  If there is one is April.  I do know this, writing allows the muse in my head to get out and stop hounding me at night when I should be sleeping.   Watch this space.

Posted by Principally Mused at 6:49 PM

Email ThisBlogThis!Share to TwitterShare to FacebookShare to Pinterest
Labels: #28daysofwriting, inspiration, self belief, self review, self-help