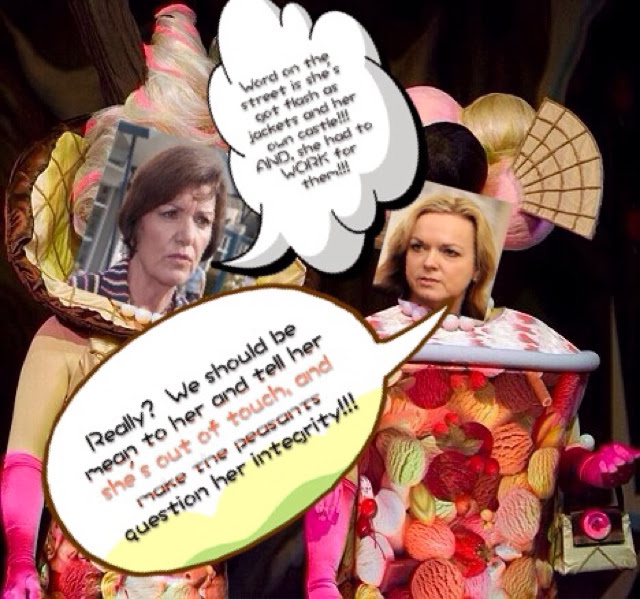 WARNING:  This is satire - if you are allergic to satire please switch eyes off now.


Once upon time, in the Land of the Long White Cloud, a young woman worked hard campaigning for the rights of those less fortunate than herself, and earnt herself a place within the countries Governing Palace.  She belonged to the house of the Greens, and over time found herself co-leading the house with Prince Norman.

Growing up, she dreamed of living in her own castle, and wearing beautifully tailored jackets designed to fit as snuggly as a glass slipper.   She believed, that as long as she worked hard, she could, like many 'Aotearoa-ians' before her, achieve success.

At times her life before entering the governing palace was hard.   She faced numerous failures before she eventually achieved success.

She vowed that even when she had achieved her dream, she would never forget the difficulties, or the opportunities that she had been provided with, and that she would fight hard to ensure others could have the same chances to climb the ladder of success!

All her hard work paid off, and eventually she was able to buy a home that looked castle like, and using her sustainable ideals, she decorated and improved her home to be the 'castle' of her dreams.   Finally she was able to commission the nimble fingers of the talented dressmaker Adrienne Winklemann - known for her fabulous suits across the nation.  Oh the pleasure of finally having a jacket made to fit her!

What Princess Greenerella never expected, was that her fellow Min-is-Sisters from the house of Blue were less generous and had been struck down with a terrible disorder 'selfish-initis'.  A disorder that left its afflicted bereft of kindness, compassion, and most importantly, a conscience or moral compass.  Instead, it made them say cruel, unkind words, and left them with a twisted bitter jealousy.

When the verbal attacks came, Greenerrella was taken aback by the vitriol that spewed forth from her fellow Governing Palace representatives.  For nearly a year, 3 members from the House of Blue took pot shots at Greenerrella - belittling her in an attempt to make her feel as if she did not have the right to be in the Governing Palace.  Nasty, rude comments - the kind of comments that one might find in a hormonal teenage girls locker room - not from people who were meant to be role models for the citizens of the Long White Cloud.

Phrases like 'sanctimonious hypocrite' were aimed her way.  Further snide statements were directed at her.  Statements dripping in sarcasm and designed to disparage Greenerrella and bring into question her integrity, were used.  One House of Blue member implied that because she was 'resplendent in her Adrienne Winklemann jackets' she was hypocritical to speak about social justice, a cause she was passionate about.

Further insult was added when the Min-is-Sisters publicly insulted her by calling her jackets 'ugly'.   On one occasion, one Min-is-Sister of the House of Blue was stricken by a particularly nasty spot of 'selfish-initis', and lashed out at Greenerrella after one her speeches, saying it was 'vile, wrong and ugly.  just like her jacket'.

Finally, Greenerrella decided to bring to the attention of the Nation just what kind of horrid behaviour was occurring in the Palace of Governance.  She stood up for herself, and declared the bullies for what they were - rude, petty and inappropriate.   This, instead of eliciting an apology for their outrageous behaviour, merely amused one of the Min-is-Sisters who declared Greenerrella was simply being 'a sensitive little sausage', and that she stood by her comment that Greenerrella's jacket was 'really ugly'.

By telling her story, she was hopeful that the Nation would be horrified that such powerful people were being such bad role models, with behaviour that would see them sanctioned as bullies if they were still at school.  Considering the roles two of the representatives from the House of Blue had in the Palace of Governing, it was critical that their affliction of 'selfish-initis' was treated straight away.   This was a case of how dangerous 'selfish-initis' was, and how if not treated, had the ability to obscure citizens from hearing about the real issues.

Greenerrella however, was a generous soul, and even in her time of angst, reminded the people that the issues of poverty, social justice and equity were what was most important.  To pick on her for what she wore and the home she lived on, said more about the others moral integrity and their maturity, than it did about her.  She stood by her passion for making a difference and knew she had a proven track record.