Children Are Not Collateral Damage 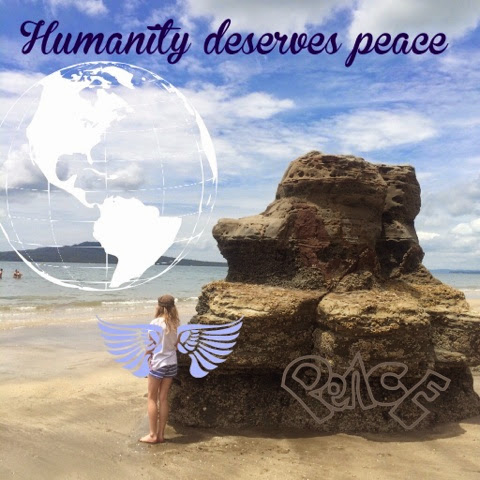 War and conflict dominates our headlines lately.  Every time we turn the television on, check our Facebook and Twitter feeds or spy a paper - digital or of the old fashioned, newsprint kind - war confronts us.

For the most part, people like you and me (yes, you and me) generally zone out.  Another war, another conflict in a far off country, usually 3rd world, and a million miles from the busy modern world that dominates our day.  Every now and again, our interest is piqued, we lift our eyes to the news and we take notice.  Perhaps a kiwi has been killed in a drone strike, and it hits a nerve.  It seems just that little bit too close to home.

Whenever these things happen, our daily lives take a temporary detour and we find ourselves tut tutting and expressing distress, disgust or outrage on whatever new conflict has caught our attention.  Before long our real life takes over and the daily grind takes precedence.

Some events catch our attention quickly.  Events like the Stolen Girls of Nigeria.  When I first heard about that appalling situation I was incensed that over 200 girls could be stolen and nothing was done about it.  To this day, those young girls and their families have been failed and justice has remained elusive.

More recently, two events have grabbed the worlds attention and I have found myself incensed once again.  Both incidences involve war, innocent lives lost and powerful men who could call for a ceasefire and do something about it, but fail to do so.  I suspect arrogance and ego is what is getting in the way of common sense.   The first is the Malaysian passenger jet that was shot down over Ukraine, and the second is the rising death toll in Gaza as the war between Hamas and Israel heats up.

A ceasefire in the Ukraine would allow the UN and the investigators of the passenger plane that was shot down to get to the bottom of what happened.  This could ensure the bodies and items of the victims were recovered and returned to their loved ones, and all the countries that have been impacted by this a chance for closure.  I suspect there are bigger things at play here.  While I think this situation is a disgraceful act of terrorism, it is the situation in Gaza that really has me riled.

It is the children.

Bombs are hitting UN schools, hospitals and playgrounds in refugee camps.  These bombs are killing civilians, in particular they are killing children.  Not just a few, but hundreds.  Children who were just embarking on their journey into life.  Shot down, and snuffed out.  Most appallingly, both Israel and Hamas are blaming each other.

I am aware that the issue in Gaza is older than the whispers trapped within the hills themselves. I am aware it is complex and an answer to peace is fraught with difficulties.  I am aware that if Israel did not have such a sophisticated anti missile system, the Iron Dome, then there would be just as many innocent casualties and dead children in Israel.  I understand it is not easy.

Right now, I care about all these children who are being killed.  They are not 'collateral damage', they are not pawns for warmongers, they are innocent children caught up in the sticky web of a war they were born into the middle of.  It is not their fault, they did not ask for this and they have nowhere to hide.  Nowhere. They can't even seek refuge in hospitals, schools or refugee camps with playgrounds.

Children are being used as political pawns and it is not ok.

Can you imagine how scared these children must be.  Can you imagine the terror and the trauma they must be facing?  For those who are left to survive, the scars this war will leave on them will run deep.

Right now across the world there are more wars going on than you can possibly imagine.  Certainly more than I expected.  In Africa alone, there are 25 countries embroiled in conflict.  In Asia there are 15 countries, 9 in Europe, 8 in the Middle East, and 5 in the Americas.  In total there are 62 countries involved in war with 549 different Militias/ Guerrilla, separatists, and anarchic groups caught up in the conflicts.   UNICEF report that in the last decade over 2 million children have been killed, 4-5 million disabled, 12 million left homeless, more than 1 million left alone, and some 10 million psychologically damaged.  These figures are rising.  All this fighting is over either land, resources or religion - or all of the above.  It is not ok.

War, from my perspective, is pointless.  The people who lose are not those who perpetrate it, but the women and children who become the victims of senseless violence.

At what stage will our world say enough is enough.  If humanity can not protect its children from the harms of war, famine and pestilence, then we are doomed.  For every child's life that is lost, we lose an opportunity and we lose potential.

As a world we have no idea what society has lost.  Anyone of these young children could have been the next inventor of the technology that cures cancer, solves the issue of global warming, or invents the next iPhone.

We can't afford to watch humanity self destruct.

The real question is, what can those of us living in the western world do about it?  What do we need to teach our own children about tolerance, equity and fairness?  How do our schools equip our children so they can stand up to injustice and begin to create a world where we live in peace.

When we look at the world and all its issues, it seems like an impossible task.

Perhaps we start with our own countries, our own schools and our own children.

I just wonder, is it enough?